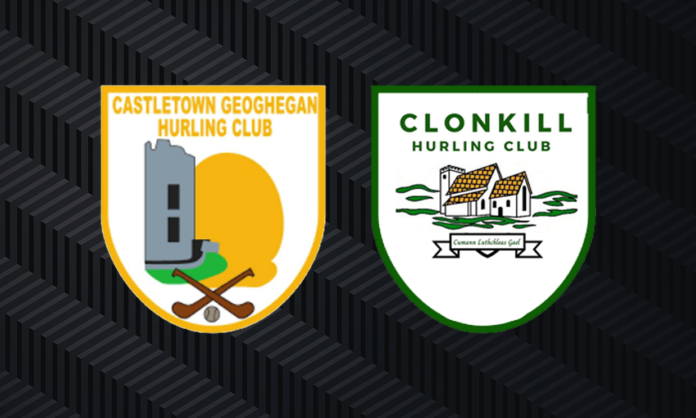 To lose one final is heart breaking, to lose three finals is soul destroying. On Sunday, Castletown are aiming not to lose four finals in row. If they do they will be celebrating their first senior hurling championship since 2017 and those celebrations will be special.

To do so they will have to beat a very determined Clonkill side. But manager Alan Mangan is under no illusions of the task they face in this Sunday’s final.

Mangan, who has three county medals with Castletown has also managed in two Westmeath Senior Football finals with Tyrrellspass. “We lost both those finals in 2016 and 2017, so I am hoping the result changes this year,” says Mangan.

“It is a massive occasion as a club for us, we need to get across the line this time. We have played in these big finals for the past three years and we have come out the wrong side of those finals, so we are hoping the result goes for us this time.”

“We have to learn from our experiences over the last few years. You have to go out and try to perform to your level best, if you do that then the result might take care of itself. Looking back at those finals there were a couple of finals we were very unlucky not to win, particularly those two and three years ago, but last year we were probably beaten by a better Raharney side on the day.”

“When you look back the lads came so close those years and you can’t underestimate the work that Pat O’Brien has done for this club. He has brought these lads so far, and then I took over and the other lads such as Derek Gallagher, Keith Gorry, Michael Garvin, Ian Corrigan and Damien McLoughlin came in. So we then had a group that were well drilled over the past few years. We haven’t done that much different to what Pat was doing, hopefully we can just add that little few per cent that these lads need to get over the line. But we certainly won’t be underestimating how good Clonkill are,” said Mangan.

Heading into the final Castletown are missing the influential Neal Kirby.

“Neal is definitely out, which is really unfortunate as he was very unlucky to miss the county final two years ago and now he is out again this year. We have a few niggly injuries but hopefully we will get them right before the match this Sunday,” said Mangan.

“They beat us by ten points in the first round of games in the championship so they will be hot favourites to win the game but we are in the position we want to be in at the minute in terms of reaching the final, so we will give it a good lash,” said Mangan.

Shane Power believes that if Clonkill are to win this Sunday’s county final they will have to return to the form they showed earlier in the championship.

Power, who is Clonkill captain this year said: “We started off in the championship and beat Castletown, then play-ed Raharney and that was a huge battle. They were probably the two best games that we played. After that I don’t think we hurled as well in our games.

“We are hurling to a different structure this year and I think it is working very well for us. The younger lads that have stepped up are playing very well.

“We beat Castletown the first day by ten points, but this final on Sunday will be a completely different game. I saw Castletown playing against Raharney in the semi-final and they were well fired up for that game and they were moving the ball well and hungry for the win. They opened up Raharney well and took their goal very well so we have a huge challenge ahead of us. They will be determined not to lose another final so we will have to have our guard up.”

Power, who turned 33 this year has won a massive eight senior hurling titles with Clonkill but he is determined to win number nine on Sunday.

So what would it mean to Power to lift the cup and bring it back out to Loughegar?

“It would be a huge honour, something you always dream of. It would be great to win the game first of all, never mind be captain, so we will just take Sunday’s game in our stride,” concluded Power.

Pat O’Toole has managed Clonkill to a senior hurling title already. On Sunday he will be hoping to guide them to another county title. But it won’t be easy as O’Toole knows Castletown will be hurting from defeats in the last few county finals.

“It is always a tough game when you play against Castletown in a final. They are a great hurling team. We will have to be firing on all cylinders to beat them on Sunday.

“They will bring a big, big drive this time. They are after losing the last three finals they were in. That doesn’t go down well with any team or club and they will be no different. We will expect a massive push from Castletown, so we have to try and match that. If we don’t match their fire and desire to win then we won’t be in the game, simple as that,” says O’Toole who will be joined on the sidelines on Sunday by selectors Sean Loughlin and David O’Reilly.

O’Toole agrees it hasn’t been easy over the past month knowing they have been in the final for so long.

“We were probably in the final since the Cullion game so that is a long, long time ago. But we beat the Gaels and that was a good game for us. So we have been training away and playing a few challenge games. The lads are in good enough shape and most of our injuries are clearing up fairly well.”

O’Toole had to do some major surgery with the squad this year when he arrived in.

“At the start of the year we lost seven or eight lads for various reasons, retirements and travelling etc. So we had to go and bring lads in and they were young lads and fair play to them they have come in and done a great job. We have four or five of them on the team – Josh Murtagh, Oisin Murray, Oisin Loughlin, Mattie Glynn, Willie Holden and Andrew Shaw -it is just their first year in, but they are doing great.”

On the injury front Pat will be pleased to have seen Luke Loughlin produce a great performance on his return with The Downs footballers last Sunday and he should be in contention for a place in this Sunday’s final.

Pat added, “Brendan Murtagh is training with The Downs, he said he would come back to the hurling for a while and he was playing a bit with the intermediates, so he is around, and he will be a good man to lift the spirits of the players.

“Paddy Dowdall has been away on duty in Syria but he is back on the scene here too, and will add some experience.”

Pat also agreed that Niall Mitchell will be a key figure on Sunday afternoon.

“If you have Niall hurling well you’re in with a great chance. He is a natural hurler, it is great to see him playing well, but regardless of who is playing or not playing we have to match the heart and desire of Castletown on Sunday otherwise we won’t have a chance,” said Pat.