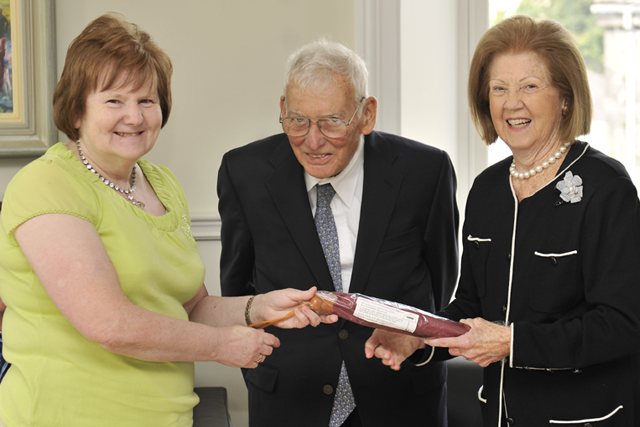 TRIBUTES have been paid to the late Mr Daniel Rooney, the former high-profile U.S. Ambassador to Ireland, who died last Thursday, aged 84.

On 18 August, 2011 Mr Rooney and his wife Mrs. Patricia Rooney visited Mullingar. This was Ambassador Rooney’s last county to visit in the Republic of Ireland during his tenure as Ambassador.

Mr Rooney was appointed to the role of Ambassador by President Barack Obama in 2009 and served until he resigned from the post in 2012. On his visit to Westmeath, the former owner and chairman of the Pittsburgh Steelers NFL team, said that he “was saving the best until last.”

On his arrival in Mullingar, Ambassador and Mrs. Rooney were greeted by Leas-Cathaoirleach Cllr. Ger Corcoran and Deputy County Manager Ray Kenny where they were given a quick briefing about the county. Later that morning, the Ambassador hosted an Open Forum in the Mullingar Arts Centre.

The Ambassador, was joined on the discussion panel by Sr. Therese and Pat Whelan, and was positive and optimistic about Ireland’s, and indeed, Mullingar’s future, adding that he believed that ‘your attitude here is excellent’ and that ‘we always have to have hope.’

When asked how Westmeath as a county united could survive the recession and increase tourism, Mr Rooney was quick to respond.

“Westmeath needs to have a plan,” he stressed at the time. “You have a great story to tell and you can accomplish a lot here,” he added, before commenting that he would put the interests of Westmeath forward at a congress that he was going to in October. He also mentioned that he thought that the local GAA players should be put to better use and become ambassadors for the county.