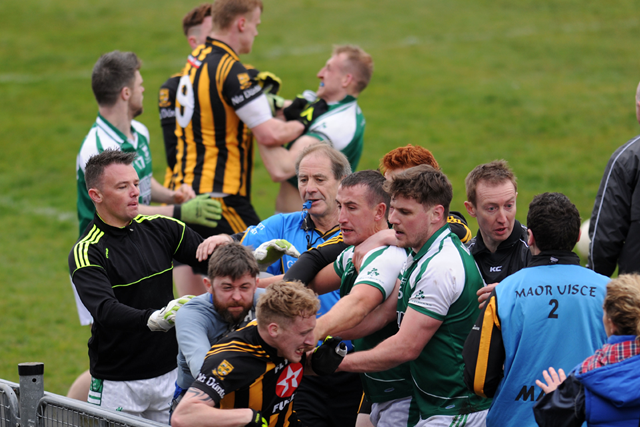 Westmeath GAA is to investigate what are being described as disgraceful scenes which took place in Cusack Park last Sunday evening during the first round of the Senior Football Championship.
Westmeath County Board Chairman, Sean Sheridan has confirmed that the Competitions Control Committee (CCC) will fully investigate what happened once they receive the referee’s report.
There was a major incident at end of Sunday’s opening game between Mullingar Shamrocks and The Downs, with one player and a team mentor involved in an ugly punch-up. A melee ensued and a number of people got involved, including players from both sides, mentors, substitutes and spectators, who came down from stand and entered the field.
It was an impossible situation for referee, Michael McAdden with so many involved and no action was taken. While play was restarted, the final whistle went seconds later. There were two sent off during the game, one from each team, on second yellow cards.
Meanwhile, in the second game involving St Loman’s, Mullingar and Tyrrellspass, an incident took place in the tunnel at halftime as players left pitch. A Loman’s player was struck and received a black eye, while there was pushing, shoving, roaring and shouting from players and mentors. Match referee, Sean Carroll tried to calm things down and eventually order was restored. The referee visited both dressing rooms to calm teams down before the second half began.
People walking by Cusack Park, not at the games, walked in to see what the commotion was having heard the shouting and roaring and then left when the row was over. It remains to be seen what disciplinary action will be taken by Westmeath GAA following these scenes, whether action is taken against players or clubs or whether fines or suspensions are issued.
“The CCC will deal with the matter once the referee’s report is furnished and I can offer no comment until then,” said Mr Sheridan, who condemned the ugly scenes.
“It’s unacceptable for this to happen and the CCC will deal with it,” he added, confirming that both the referee’s report and video evidence may be used. The CCC will be using all avenues at its disposal, the chairman confirmed.
What was supposed to be the main highlight of round one of the Shay Murtagh sponsored Westmeath Senior Football Championship turned into a shameful display of fisticuffs and Westmeath GAA will now be under pressure to take stern action. The Downs’ four-point victory over Mullingar Shamrocks (1-6 to 0-5) was the shock of round one, but it may well come at a cost.
Elsewhere, Ger Egan inspired Tyrrellspass to victory over defending champions, St Loman’s, Mullingar on a 1-13 to 0-13 scoreline. Again, those involved in the tunnel incident are likely to face the wrath of the CCC.