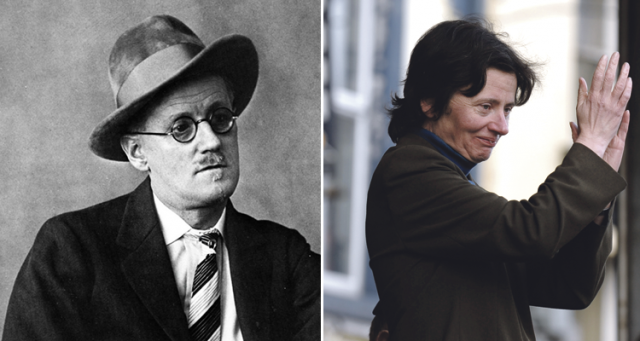 Mullingar doesn’t just have connections to some of the world’s biggest music stars, it also has many noble connections to literary greats, and none come as big as the town’s connection to James Joyce.

Between 1900 and 1901, Joyce was a regular visitor to the county town of Westmeath. Not quite the great author he was to become, the young Joyce worked, lodged, ate, drank and shopped in the town – the only other part of Ireland he spent any considerable time in.

Bar re-tracing his footsteps, very little survives of his work in Mullingar. At one point, it was thought that court files, stored under lock and key at a local solicitors’ office for decades but now missing, were written in Joyce’s own hand. If they were to be re-discovered, they would certainly be one of the finds of the century.

As Joyce lovers all over the world next Monday, June 16, get set to celebrate the Joycean day of celebration that is ‘Bloomsday’, local historian Ruth Illingworth is giving people a chance to experience Joyce’s Mullingar when she gives a guided walking tour of the places Joyce visited during his two summers in the town.

His Mullingar connection came about in 1900 when his father, Stanilaus, was employed to sort out the electoral rolls in Westmeath. He stayed at Levington House close to Lough Owel, where another internationally renowned author, JP Donleavy, presently lives.

The young James spent two long summers in Mullingar helping his dad, and scholars note that the then budding writer stored away references and characters for his latter works during his time walking the mean streets of Mullingar.

Now, you can walk those very same streets in the company of the new keeper of the Joyce flame in the town, with tours commencing at 11am and 3pm.

For many years, it was the late writer, Leo Daly, who ploughed a lonely furrow celebrating Joyce’s connection to Mullingar in book and in person. Every year, ‘Bloomsday’ was celebrated quietly, without the fanfare and the walking tours that mark it in Dublin, for example. However, in recent years, ‘Bloomsday’ has been re-energised by Ruth and others and it is now an annual occasion in the town, with Leo’s rare and much sought-after book ‘James Joyce and the Mullingar Connection’ the Bible by which the day is lived.

The walk begins with a ‘James Joyce Breakfast’ at the Greville Arms Hotel, where Joyce was a regular. From here it will be down to the Courthouse where he worked, followed by a trip into Caffrey’s Bar, which was known as Connellan’s when Joyce took tea there.

The Railway Station is next on the list, then it’s back down “the long crooked Main Street” towards the old Westmeath Examiner offices and into Days Bazaar where Joyce shopped. A book of Italian poetry, purchased and dated by Joyce in 1900, exists in an American University and it is thought Joyce may have purchased it at the legendary Mullingar bookstore.

Another shop Joyce frequented is Walshe’s Jewellers, which was Tuite’s in Joyce’s time. And then an unlikely location – Fagan Office Supplies and Toy Shop. When a young James met Milly Bloom here, it was known as Shaw’s Photo Shop and it also housed a post office from where Joyce sent letters.

The statue at the Town Park gate will be visited for it was inspired by Joyce’s work, and the tour will end at the Greville Arms.

Both tours are free.

For more on Leo Daly and his Joycean connections, visit: http://leodalyesq. wordpress.com/