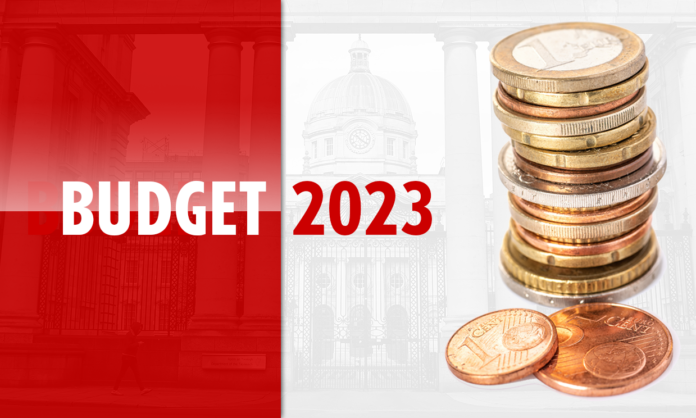 Minister for Finance Paschal Donohoe and Minister for Public Expenditure Michael McGrath are set to address the Dáil this afternoon, to outline Government spending for the coming year.

Budgets 2021 and 2022 focused on Covid-19 measures, however the focus on Budget 2023 is set to shift and address the rising cost-of-living.

Spending and tax measures announced in today’s Budget is expected to be around €11 billion, with more than €4 billion set to be allocated in one-off measures to address the cost-of-living crisis.

Income tax: An Income Tax package worth €1.1bn has been announced today’s Budget. As expected, the standard rate cut-off point will increase by €3,200 to €40,000, with Tax credits to be increased by €75. The Home Carer Tax Credit will increase by €100.

Vacant Homes Tax: The amount that landlords may claim per premises under the pre-letting expenses regime is to be doubled. The period for which a premises must be vacant has been reduced from 12 months to six months. A Vacant Homes Tax will be introduced “to increase the supply of homes for rent or purchase to meet demand,” said Minister Donohoe.

Petrol/diesel: The rate per tonne of carbon dioxide emitted for petrol and diesel is set to be increased from €41 to €48.50 from 12 October, resulting in an increase of just over two cent – VAT inclusive – per litre of petrol and diesel.

Hospitality/nightlife: The special exemption fee required to host late night events is to be reduced from €110 to €55. The 9 per cent VAT rate for tourism and hospitality sectors will continue until February 28, 2023.

Cigarettes: The excise duty on a pack of twenty cigarettes has increased by 50c, with a pro-rata increase on other tobacco products.

Electricity: Electricity credits for all households totalling €600 is to be paid in three instalments of €200. The the first of these is due before Christmas, with two further instalments in 2023. Recipients of the normal weekly fuel allowance will receive a lump sum payment of €400 before Christmas.

Social protection: For individuals in receipt of a weekly social protection payment, there will be an increase of €12 per week with proportionate increases for qualified adults. The Working Family Payment threshold is to be increased by €40 per week and the Qualified Child Increase for under 12s to be raised to €42 per week and for over 12s to €50 per week.

Fuel allowance: From 1 January, the qualifying income threshold for the Fuel Allowance will increase by €80 to €200 above the relevant rate of the State Pension Contributory. For over 70s, the weekly Fuel Allowance means limit will increase to €500 for single people and €1,000 for couples.

Childcare: A lump payment of €500 to those in receipt of the Working Family Payment, will be paid in November. A double Child Benefit payment will be made to all qualifying households, (worth €140 per child) in addition to the regular monthly payment.

Third-level education supports: The Student Contribution Fee will be reduced in 2023 by €500 for eligible families earning between €62,000 and €100,000. SUSI maintenance grants are to be increased by between 10 and 14% in September 2023. The Post-Graduate Fee Contribution Grant for eligible students of €3,500 will increase by €500 and the PhD stipend will also increase.

Health: €225 million is to be allocated for waiting lists next year. €5 million has been provided for oral health services, as well as a specific once-off provision of €9m within the overall waiting list fund to address oral health backlogs. Elsewhere, hospital inpatient charges for all public patients are to be removed.

Women’s health: Currently available to women aged 17 to 25, free contraception is to be extended to women aged from 16 to 30 years. A number of supports have also been announced in relation to IVF treatment, expanding women’s health hubs and providing additional funding for screening.

Green economy: An additional €36m has been allocated in Budget 2023 for investment in digitalisation and the green economy. The government has also approved a Ukraine Enterprise Crisis Scheme worth €200 million for firms operating in the manufacturing and/or internationally traded services sectors.

School books: Funding will be provided for free school books for all pupils in recognised primary schools within the Free Education Scheme from September next year.

Rural/ community development: The Government announced an investment of €390 million for Rural and Community Development. €11 million has been allocated for the continued response to the Ukrainian refugee crisis at community level to help integrate arrivals from the Ukraine into local communities.

Irish Aid: For the 50th anniversary of Irish Aid in 2023, the Government is to increase the total support for Official Development Assistance to over €1.2 billion in 2023, an increase of €177 million on 2022. The overall increase includes an additional €100 million for Irish Aid.